Unfortunately Keath is half faerie so just being near a hunter can be enough to make him collapse, and Katie is only human. Keath finds it difficult to trust in his own abilities when his family and friends seem to fear for his life. The past rears up to confront him, the lies his father told him and the truth about his life begin to unravel and Keath is left troubled and confused.

His father pushes him more than ever before to fight against his faerie genes and Keath has to figure out if he is strong enough to overcome his faerie weaknesses and become the weapon many people think he could be. Danger and destruction seems to follow Katie everywhere and when one of the most dangerous people she has ever crossed comes back into her life, she struggles to keep her fight her own. She has never been one to tell the truth, and the habit of lying is hard to break. Kath can't deal with her intense relationship with Kaevin.

The hiding and sneaking around begins to wear down on her and she isn't sure if love is enough anymore. Kaevin is once again surrounded by the cruelty and darkness of his kingdom of Tempest, but this time he has to work harder to save his new friends from the danger threatening to destroy them all, or risk losing the only thing keeping him from the darkness of his kingdom.

The Faeries are in great danger from creatures they cannot hope to stand against, creatures that look human but are made of iron. They were human once, the hunters, but they delved so far into the realm of Faerie they found a way to make themselves stronger than the fey. Iron is deadly to the fey; the hunters knew this and used it. Thousands of years ago, they found a way to increase the amount of iron in their blood without killing themselves.

Their blood turned grey, and they lost their humanity. Since that fateful time, the feared faerie hunters have been predominantly iron-blooded, more machine than human, and their lineage spread. If you kill one, they do not die like humans or fey or any other being that exists within this world.

The metal that lies in their blood will leak out and eat away their skin and bones until nothing is left but iron. They are forever fighting to find a way to purge all faeries from the world. But evolution is a tricky thing, and with time, all creatures change and neither hunter nor fey nor human could have known of the future they would be forced to face, and the changes that were to come. Around that fateful time the hunters became iron, the kingdoms of Faerie came together to find a way to fight the hunters, the one existence they feared above all others.

They brought their Crowns together and used all their strength to force terrible and great power into a lone mortal boy. It had to be a mortal, because mortals were immune to the deadly effects of iron. It had to be a little boy, for who else would readily Believe in the fey, and who else would agree to bear such a terrible responsibility? The faeries involved in the transference died instantly, but the deed was done. The rest of Faerie called him the Believer. He Believed in the fey enough to let them put such power in him and agreed to wield it for them against the iron hunters.

The remaining hunters fled and hid, biding their time. The Believer power became a life of its own, and when the boy died, the power was released to find a new Believer to settle in. A trustworthy family was charged with teaching the Believer how to understand the Believer power and what they had to do with it. The family kept records, books and journals of their predecessors to keep the knowledge fresh and to stop it from bring warped though word of mouth.

It continued that way throughout the years unto this day, and it will continue that way till all hunters and fey are gone from this world. The power now resides within Kathleen. Here continues her story, the story of her friends, the story of King Kaevin, Faerie King of the Tempest Kingdom, and the story of those who fought to keep the fey alive and those who wished to see them dead.

Kathleen strode through the dark Killarney forest, her boots crunching the ground despite her best attempts at stealth.


Kath was a Believer and she was searching for hunters. One could say she was hunting for hunters. It was her duty and responsibility to destroy them; it was what the Believer power was meant for. Kath walked through the forest concentrating harder on her footsteps, managing to keep them silent.

It had been a while since a hunter was spotted in the Killarney woods, but Carlow, her trainer and guider whose family had been charged with instructing the Believer in their power and responsibilities for thousands of years, insisted she keep to her weekly routine patrol. Over the last month, she had spent some days and evenings patrolling the woods and forests of Killarney, and others patrolling the woods behind her home in Bantry, Ireland. Kath blinked into the dark trees. Her vision was sharper than the average human, as were her strength and healing capabilities.

She was still learning how to use her new found capabilities, though, and some things came easier to her than others. Kath had been taught her entire life to stay away from the faeries. Many months ago, she had been brought into the world of faeries despite how much warning she had received. And her boyfriend was one of them. Not just a faerie, he was the King of the Tempest fey, the darkest fey in the world. A figure moved in the distance and Kath jerked her mind into the present. It could be a faerie. Killarney forest was Tempest territory, but Kaevin had ordered his Court to stay away from her.

Still, most Tempest fey hated Kaevin and would love the chance to attack her to hurt him. Faeries of the other kingdom were a source of concern too. But this was Tempest territory, and none of the Forest Grove fey should be around. That left Tempest fey and hunters. Which one was the figure? Kath squinted. There were two figures now, and they seemed to be moving towards her. The figures became clearer and three more joined them.

If these figures were fey, Kath was in big trouble. Believers could not hurt fey. The faeries that put the power in the first Believer thousands of years ago were the stereotype human-distrusting faeries and embedded a single restriction within the Believer power. The power could not be used against faeries. Kath knew what it felt like to try hurting a fey, she had done it before and it was the most painful experience of her life.

So hurting a fey was beyond her capabilities.

The figures closed in on Kath and she took a fighting stance, her special hunter-killing dagger fixed firmly in her hand. They were surrounding her, but still she could not see them well enough. Kath closed her eyes and took a deep breath. Kath could see through faerie glamour that hid the fey from human sight when they wished it. Usually she could sense if a person that looked human was either a faerie or a hunter, but she was still learning on applying that ability to creatures that were out of her sight range. Kath let out the breath slowly, and a shiver crept throughout her entire body as she felt the presence of the figures surrounding her.

Kath was beyond relieved. They were hunters. She could fight them. The bad news was that there were five of them.

Her heart thudded vigorously and she swallowed. She held her breath and tried to ignore the uneasy knot in her gut. She had to try or die. In the next moment the figures were up close and personal invading her space, swiping at her with deadly iron daggers. Kath ducked and dodged, leapt and spun, rolled and dived, twisted and turned, moving as fast as her Believer powers allowed and dealing as many punches and kicks as she could. 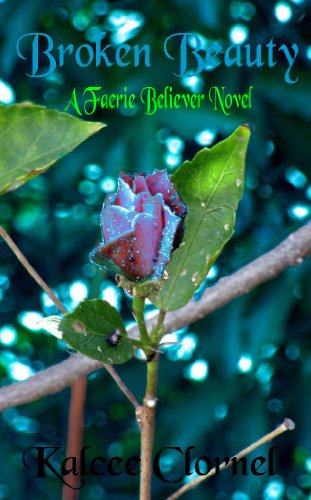 The most she had fought at once was three. Two more made a hell of a difference. Kath had severely weakened three of them, but the other two did not seem to have a scratch. She leapt into the air and spun clockwise, delivering a powerful roundhouse kick that took down two hunters. She immediately followed through with a dive and brought her daggers straight into the hearts of the two hunters. She silently thanked Carlow for his teaching as she watched the grey iron blood devour their bodies. Then the next second she dove sideways, narrowly avoiding a blow from another hunter.

Two down, three to go. The hunters had superhuman speed and strength, but so did she, being a Believer. After a few more minutes, Kath got in another kill, finding an opening with one of the hunters. She drove one of her daggers into his chest and forced it further upwards, making sure she got his heart. She wasn't taking any chances.